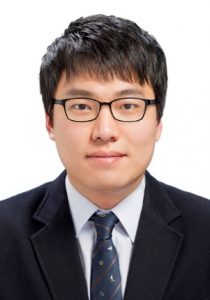 Suckchang Hong was born in 1986 in Nonsan, South Korea. He completed his B.S. in 2008 at Seoul National University, College of Pharmacy. In 2014, he obtained his Ph.D. degrees in Pharmaceutical Synthetic Chemistry from Seoul National University under the guidance of Professor Hyeung-geun Park with the thesis entitled “A novel synthetic method for chiral α,α-dialkylmalonate via phase-transfer catalytic alkylation and its application to total synthesis of (–)-horsfiline”. In the same year, he won the Future Promising Pharmacologist Award from the Pharmaceutical Society of Korea (PSK) and the postdoctoral fellowship from National Research Foundation of Korea (NRF). Then he just started his postdoctoral work in the laboratory of professor Michael J. Krische at University of Texas at Austin in 2015. During postdoctoral period, he worked on the development of new asymmetric methodologies using transition metal catalysts, and completed enantioselective total synthesis of natural product, Swinholide A, one of the huge polyketide contained 44 membered macrolactone. Upon completing his postdoctoral studies in 2016, he joined the convergent research center of emerging virus infection in Korea Research Institute of Chemical Technology (KRICT). In 2017, he has moved back to his alma mater, Seoul National University, and started his professional career as an Assistant Professor.

Now, his research is broadly based on pharmaceutical synthetic chemistry. He is developing synthetic tools (reactions and catalysts) and strategies for efficient and selective synthesis of drug candidates. In particular, his research interest focus on the development of metal catalyzed chemical transformation that can resolve longstanding synthetic problems and offer new synthetic route for future drug development. Not only small molecules, his investigations are also concerned with the synthesis of natural product with complex architecture and significant biological activities. Based on established chemical libraries and strategies, his final goal is a discovery of potential drug candidates as a therapeutic solution of intractable disease, like a cancer and multi-resistant bacteria infection.